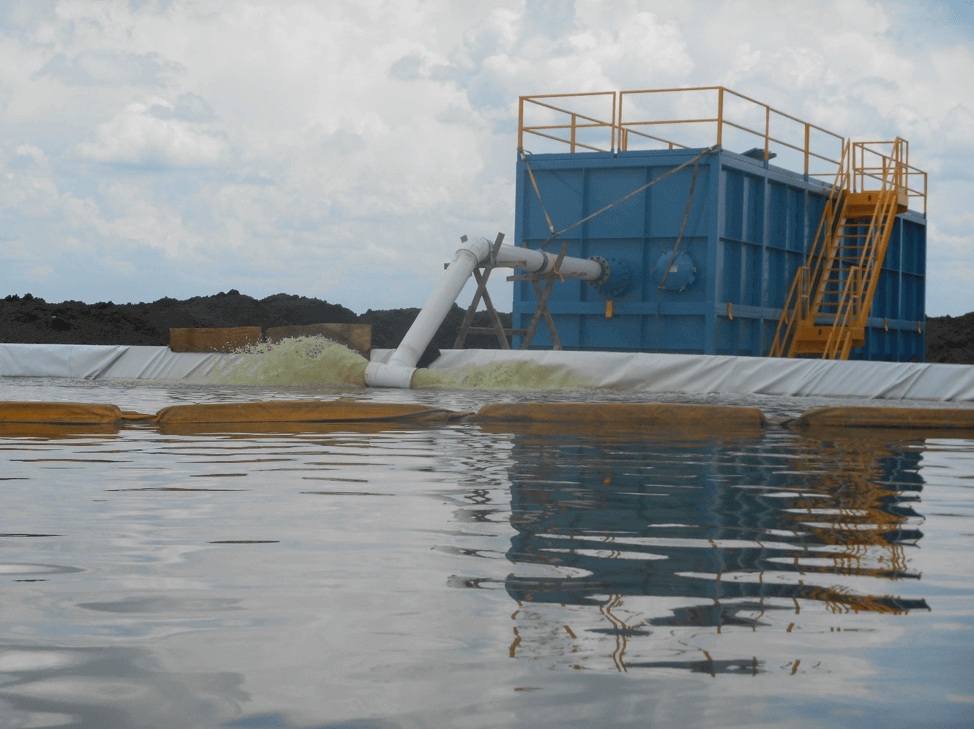 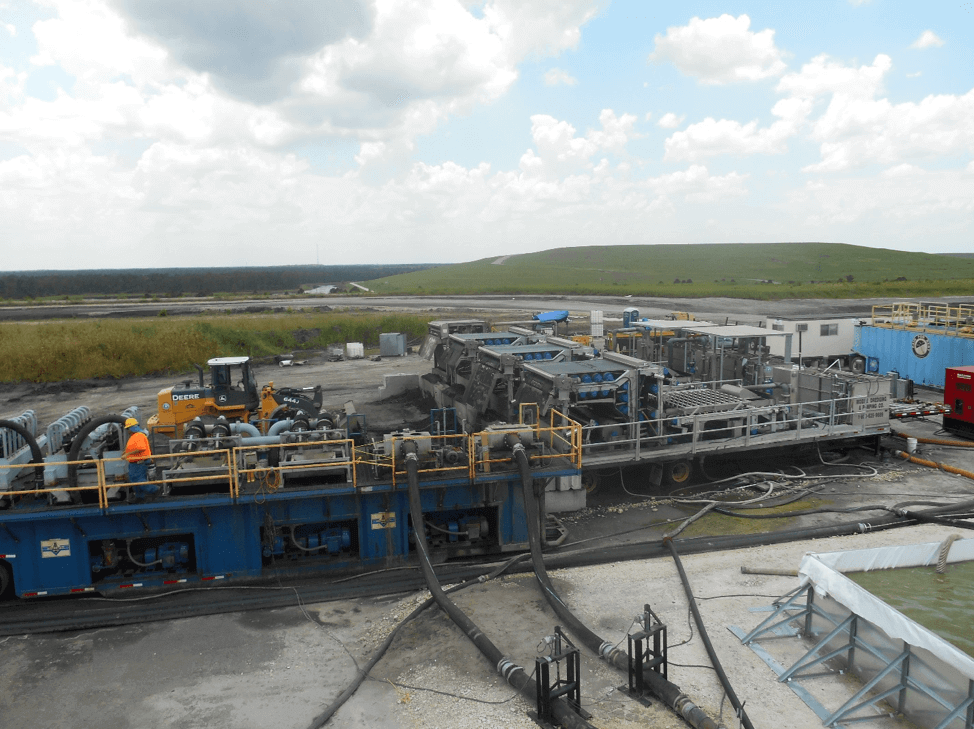 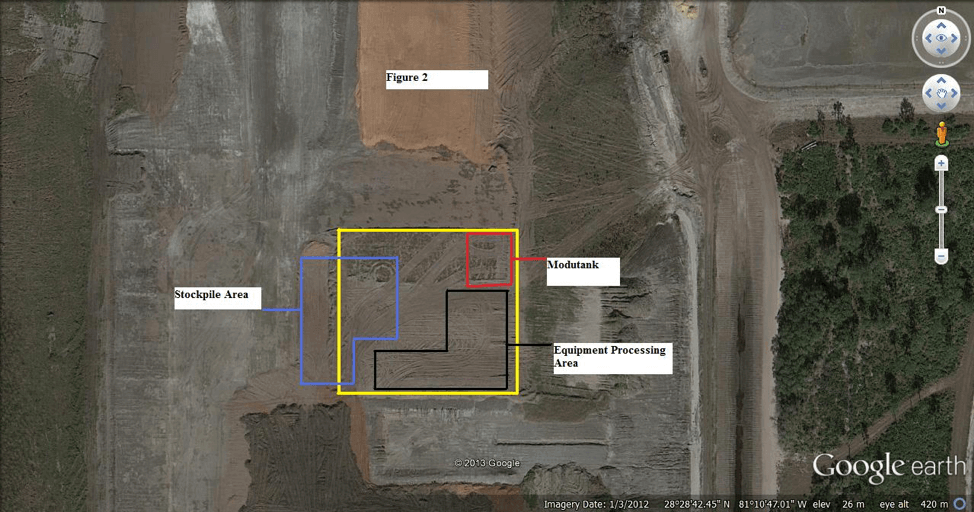 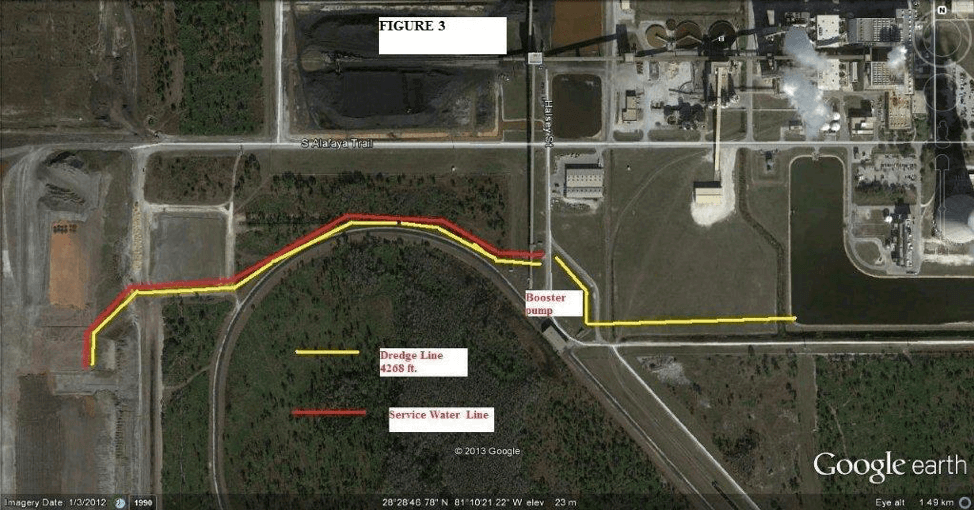 Project Background
The Orlando Utilities Commission (OUC) Stanton Energy Center’s power generating station began operation in 1987. One of their recycle basins is used to collect water for use in the flue gas desulphurization (FGD) and ash handling systems. The recycle basin had not been dredged since plant startup and sediments had accumulated which were negatively impacting plant operations. The sediments needed to be removed while the basin remained in service, and water quality standards needed to be maintained for the FGD process which was critical to plant operations.

Carylon Sediments Group Steps In
Two companies from the Carylon Sediments Group – Mobile Dredging and Video Pipe Inc. and Metropolitan Environmental Services Inc. – developed a process to successfully remove and dewater the coal combustion residuals from the SEC recycle basin. Their process involved hydraulic dredging of residuals from the recycle basin pond, long distance pumping of residuals to a distance of approximately 4,300 feet away, mechanical dewatering of the residuals at the on-site combustion waste storage area (CWSA) landfill site, direct placement of the dewatered residuals on the landfill face, and treatment of the process filtrate to remove solids.

Project Implementation: Recycle Basin Dredging Operations
Three key items needed to be achieved at the recycle basin while the sediment removal was occurring:
1. Protection of the sand and high-density polyethylene (HDPE) basin liner system
2. Maintaining water quality in the basin to allow continued operation of the FGD process
3. Removal of 27,000 cubic yards of accumulated sediments

To address these necessities, the dredge auger head was equipped with wheels to prevent it from disturbing the sand layer. In addition, the dredge operator had a real-time display of the auger head vertical location relative to the sand layer on a computer screen in the dredge cabin. Progress surveys, in conjunction with flow monitoring, solids sampling of the dredge slurry, dewatered sediments and return flow, were used to determine dredge quantity volume as the basin was in service and receiving influent solids from the plant during removal operations.

CWSA Landfill Sediment Dewatering Operations
The dredge pumped the solids from the recycle basin to a booster pump, which pumped the slurry to a TriFlo 2000 unit at the dewatering equipment staging pad. A 21,000 gallon mix/storage tank was placed in-line between the TriFlo unit and belt presses to provide a homogeneous feed to the dewatering equipment. This mix tank received the fine-grained sediments, which were not removed by screens and hydrocyclones. The filtrate from this stage of dewatering was discharged into a trailer mounted clarifier unit. Solids collected in the clarifier were returned to the belt filter press operation for dewatering.

Project Results and Costs
Approximately, 27,000 cubic yards of coal residual sediments were removed from the pond during 43 days of active dredging. The plant remained in service during the dredge event, and there were no negative impacts to the plant’s FGD system. All dewatered coal residual solids placed at the landfill passed the paint filter test requirements and were typically in the 55% total solids range.

Conclusion
This project demonstrated that a closed-loop dredging and dewatering process could be used to remove sediments from an active, in-service basin at a power plant with minimal impact to plant operations. All coal sediments residuals that were removed from the basin were disposed on-site at the landfill. All water used during the process was recycled into the plant water management system and returned to the recycle basin for reuse in the operation of the plant.